The morning we left Bryce Canyon, I turned on the bathroom faucet.  Nothing.  Uh-oh.  We’d left the water hose connected to the rig all night; apparently it got below 32 degrees long enough to freeze the hose solid and burst our water filter.


Nearly two years on the road and we still made a rookie mistake. Other than the disposable filter, however, nothing else was damaged.  So as soon as the hose thawed enough to coil it, we put it in the shower to drain, threw the filter in the trash, and drove to our next stop:  Capitol Reef National Park.

We’ve been to Capitol Reef many times before (actually 8 times during the nine years Jim and I have been together) so it’s obviously a favorite.  No matter where you are in the park, you have amazing views of red cliffs, orange and red canyons, white domes and castle-like rocks I can’t adequately describe.   Capitol Reef is also close to the little town of Torrey, Utah, that has several funky and good restaurants.

Since Capitol Reef is a little off the beaten track, it’s  less crowded than Arches, Bryce or Zion.  So when we arrived on a Sunday -- a day campgrounds usually empty out as weekend visitors leave for home -- we expected the campground to be nearly empty. Instead, at 2 p.m. it was nearly full.   We grabbed one of the few remaining spots and by 5 p.m. all the sites were taken.

Bottom line, however:  we had a great time at Capitol Reef but had to leave for an important engagement home in Salt Lake City: grandson Marshall's first birthday, which was yesterday.  I'll post a few times while we're home, but check back for sure in about a month when we take off for another stint on the road.

Maybe it's because we've recently been to umpteen state and national parks.  Maybe it's because we're on the homestretch.  Or maybe it's because, I'm embarrassed to say, at this point every park story sounds like the following:  Shallow sea, dinosaurs, the color of the rocks is caused by [insert local mineral here], uplift, erosion, primitive peoples, Native Americans, conquistadors [or Spanish priests, fur traders, Mormons or John Wesley Powell], permanent settlers, and there-is-no-where-else-on-earth-like [insert park name here]. I've missed a few but you get the idea.

So.  Today we took a short tour of Bryce Canyon National park. It really is a beautiful place and has what appeared to be some great hiking.  But our Bryce tour consisted of the visitors' center, three scenery overlooks and driving half of the 18-mile park road.

Beauty and the asphalt

Yesterday we did three short hikes near Page, Arizona.  The first one was at Horseshoe Bend, just south of Page, and was actually recommended to us by a gas station attendant at the Grand Canyon.  Then we walked to Glen Canyon's beach area and a place called "Hanging Gardens," both just north of the Glen Canyon Dam.

This morning we left Glen Canyon and drove 70 miles to Kanab, Utah.  Kanab is a pretty  town, but it's in a mess right now because its main street is being resurfaced and there are lane restrictions and closed roads everywhere. We couldn't even get through the orange cones to the private RV park we wanted to stay at until we found a grocery store parking lot, unhooked our tow car, drove back and figured it out.

After getting the rig settled in, we drove to the Coral Sand Dunes State Park and then to the Best Friends Animal Sanctuary. On the way, we saw the resurfacing crew at work on the north end of town.  We figured they wouldn't get anywhere near the south end of Kanab and our motor home park today.  So it shouldn't be hard to guess where the asphalt crew was when we came back:  right in front of the motor home park.  I mean exactly in front of it.  A woman on the crew told us to park across the street in a dirt field, walk over the asphalt and then get our car after a couple of hours. We ended up not walking on the asphalt because it was too hot, but we did get both us, Cooper, and eventually the car back to the rig. Now we just have to get out of here tomorrow.

We planned to leave the Grand Canyon yesterday, but 68 mph winds got in the way. It didn’t feel that windy, probably because we were in a campground with trees, buildings and big rigs to protect us.  But a 33-mile stretch of Interstate 40 was shut down all day because of wind and dust, so it was bad.
This morning was cold but calm, so we took off for Glen Canyon National Recreation Area at the Arizona/Uah border.  AZ 89 just south of Page, AZ, is closed due to a “geologic event” that happened in February, so a detour added 50 miles to the trip.  But the drive was beautiful.  Our route included last glimpses of the Grand Canyon (which after four days still looks like a theatrical backdrop), juniper forests, sand dunes, hoodoos, red rocks and now Lake Powell.

My brain is on scenery overload. Yesterday we drove the 25-mile Desert View Drive, the road that follows the Grand Canyon's south rim from the main Visitors' Center to the park's east entrance.  The road has 15 pull offs where you can park and look.  We stopped at about half of them plus went to the east entrance visitors' center.

On the way back we took a short detour to Tusayan, AZ, seven miles south of the park, and saw the Grand Canyon IMAX movie.  It was cheesy (it ended with crashing cymbals, an American eagle and a lightening strike) but had gorgeous views and all those makes-you-sick-to-your-stomach shots from low-flying planes and ricocheting river rafts.

This morning we walked part of the paved trail that hugs the edge of the south canyon rim. Afterwards we were going to have lunch at the Canyon Cafe near the main visitors' center.  Instead we watched TV coverage of the Boston Marathon bombing.  Then I called my kids just to touch base.
Posted by Jim and Bev at 9:15 PM No comments:

Bright Angel Trail is the most-used trail at the Grand Canyon.  It’s a 9.3 mile hike from the canyon rim to the campground at the Colorado River. It’s also the trail where mules carry tourists down the trail.

Even Jim is impressed

When we first walked up to Mather Point, which is the viewing area near the Grand Canyon Visitors' Center, a little girl near us yelled "It looks like a painting!"  She repeated that two more times.  Then Jim walked up and if you haven't read the title of this post, please do.

Photos do not do the Grand Canyon justice, but here they are anyway. 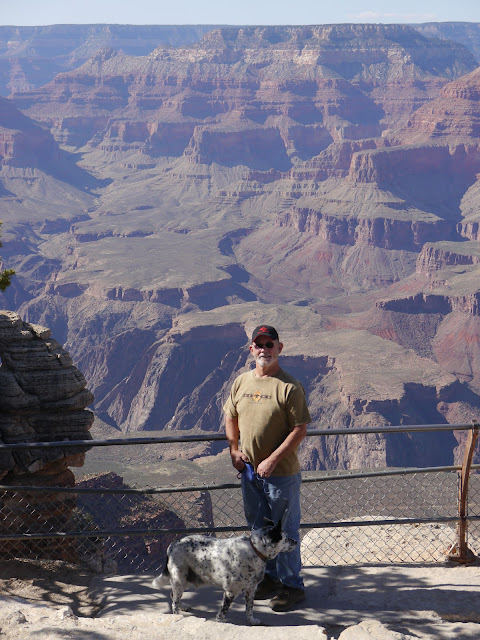 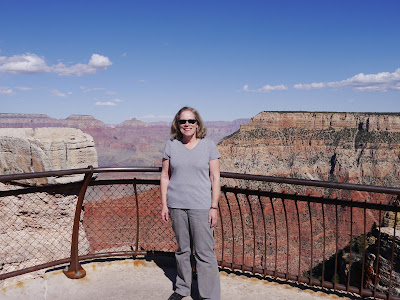 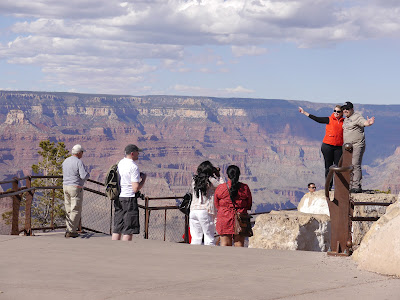 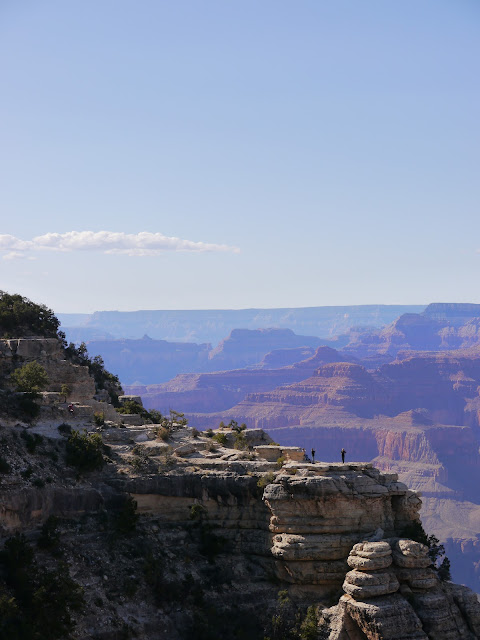 Bev and Jim in the Smoky Mountains.

Jim and Bev
Salt Lake City, Utah, United States
We bought a used motor home in the spring of 2010, retired July 29, 2011, and are now "full timing" in our house on wheels. This is our story about buying the rig, getting used to it, and our trips. We like to hike, kayak, and see new places. We also like to visit the occasional brew pub so Jim can continue his quest for the perfect IPA.